September 17, 2019
In a past couple of years, IoT has revolutionized the world with its ability for touching almost every aspect of life where it has encouraged mobile app development company to move forward for developing IoT solutions as they are giving opportunities for gaining competitive advantages by collecting data from the multiple points, so some are human-controlled, and others are automated. However, IoT has given challenges which are mainly concerning security as well as privacy of data, so since it has gathered over the cloud from devices, thereby it has increased its vulnerability for hacking. 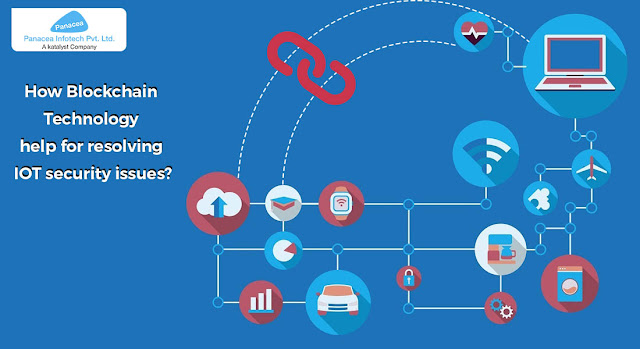 Blockchain technology and its advantages

Blockchain is a distributed ledger for maintaining all the transactions as well as for growing a number of data records while transactions are related by the network participants so that it can get recorded in blocks to ensure that they are arranged in the right sequence to assign a recorded timestamp when they become added. As Blockchain technology is decentralized, so there is no central authority or any specific administrator is necessary for approving transactions or for establishing guidelines for their use because, with the removal of intermediaries, the long and inconvenient banking process can be bypassed for offering a reduction in both costs as well as time. Furthermore, Blockchain technology is mainly based on cryptography algorithms which are designed for ensuring the prevention of data distortion or for ensuring high security. Therefore, every block on a network has a mixture to the previous block, which is nothing but an intermediate block on the database which cannot be replaced while a block can be extended, which you can’t change it. However, today Blockchain technology investment by numerous sectors of the economy is rising from the governments of the world, universities, and corporations, so it would seem that more and more industries have been seeing reasons, so that is why it’s good to invest in the technology.

Internet of things (IoT) is all about getting and transmitting immense amounts of data by using its system and linkage in real-time because every business needs privacy as well as security, so the major task here is to secure the protection of all the data and communication. So, the data flows across various kinds of integrated solutions and devices, by including machines, analytics capabilities, devices, and platforms, so it needs to pass through multiple administrative boundaries on with each having its own set of policies, where it becomes complicated for ensuring the safe function of IoT system and a proper management of data apart from protecting data. So, it is also essential for ensuring safe data delivery to the right place, form, and time. Moreover, it doesn't matter the way your company participates in the IoT ecosystem, some issues will surely arise, and then you will need to deal with some of these IoT security challenges where numerous app development companies will be pre-occupied with stabling the proper safeguards.

Since numerous IoT enabled devices use a network, where hackers can also penetrate the entire network by using a single device that has not updated its security system, so the risk can arise from something as simple as allowing an employee to log in to the network by using a personal device with a weak authentication or by using encrypted data transfer. Therefore, by considering all the array of smart devices used at the workplace, from mobile phones to TV’s scanners and printers, so that the risk multiples as any of these devices can be hacked.

There are numerous devices, protocols, and standards for making the network implementation of an ongoing process, so this leaves no gaps for any attackers to identify and use to hack into the network so that it can take control of it or in some instances deny services to the users.

Whenever there is a human element associated in the recording and storage of data, there always be the possibility of errors while inputting data, compiling documents, risk of data loss, and unauthorized modification, so the advantages of Blockchain help for eliminating the need for logins as well as for passwords, instead a device is issued an encrypted identity like an SSL certificate to verify on the distributed ledger so that the human errors can minimize by including every activity, potential threats which are followed and instantly notified on the network.

One of the most primary issues with IoT is the need for keeping the data safe because Blockchain usually creates a decentralized ledger and unalterable data to record for protecting as well as for controlling communication or any other activity which takes places within the system. So, the data protection not only applies for just cryptocurrency, but also for healthcare to patient information for improving records management as well as for minimizing the unauthorized distribution for prescription drugs and among any other things.

Nowadays supply chain management industry has started facing complex challenges because of which counterfeit goods or illegal transactions transported goods pass through close to hundred delivery points or parties by including manufacturers, distributors, and other retailers right before reaching to the last destination. So, by providing a digital ID for each product, Blockchain helps to give complete visibility at every stage of the supply chain by eliminating the possibility of frauds as data is unalterable, which cannot be deleted.


So, to sum by proving the solutions to bridge the gap in the current issues of IoT like privacy, scalability, and reliability, Blockchain development has created numerous dependable ecosystem on which all the devices can connect on cloud or with the internet. So, with cryptographic algorithms, validation of transaction as well as continues monitoring or recording of threats, Blockchain can take care of all the challenges which are currently spreading over the IoT solutions to provide a more secure environment for enterprises to operate without worrying about threats to data security.